skip to main | skip to sidebar

If you want a toddler to remember a certain new word, you have to apply that particular word in your sentences on a regular basis. When I say regular basis, I mean your every other sentence should have the new word in it. Last week, the new word in the Zombiedaddy household was ‘cornflakes’.

Back from work the other day, we noticed that Raisa was eating cornflakes from her favourite pink bowl. We wanted to see if she remembers the word cornflakes, so Supermama asked her what she was eating.

Apparently we had missed something. If you really want a toddler to remember a certain new word, you’d better make sure that everybody else in the house use the exact same word. That includes The Bibik!

We definitely have a new word in the house. But it’s not cornflakes. It’s ‘kriuk kriuk’. And I have to admit that ‘kriuk kriuk’ is a lot more fun to say than the old plain cornflakes. 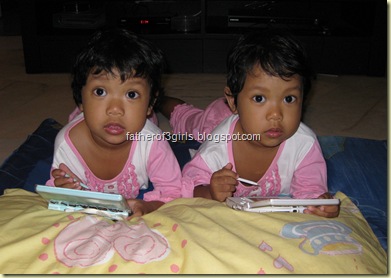 The Rule of Twins

Raina, Raisa and the Abah were playing in the living room while waiting for iftar. Kakak Nuha was half lying on the sofa probably dreaming about her ice cold bandung drink waiting in the freezer. Abah was playing pretend with the twins. He’s pretending to be sleeping. The twins were not too happy about it but that was what Abah knew he was very good at. In fact, there were a few moments while playing that he wasn’t pretending at all. The twins insisted the Abah to pretend to be a baby cat. “Baby cat scared?” “meow” “Baby cat hungry?” “meow” “Baby cat nak minum?””meow” “Baby cat so cuuute” “hah mana belajar cakap so cute nih?”

Exactly 3 years ago today, Supermama was very huge! I mean she was heavily pregnant with the twins and ready to deliver. Raina and Raisa were born 2 minutes apart on 9th August 2008. A lot of the nurses that day asked us why didn’t we try to have the twins the day before so that their birth date would be 080808 which was considered an auspicious number to some. Heck I said. What auspicious date? We were only going for routine checkup when the good gynae suddenly mentioned that one of the twins (later known as Raina) had stopped growing and suggested Supermama to be admitted right away.

9th August 2008, Week 34 of pregnancy, Supermama was brought to the labour suite to have the contraction test done. About four belts were placed around her tummy for about 15 minutes to check the contraction rate and also the babies’ heartbeats. Subhanallah, both babies’ hearts had the same rhythm and beat as if there was only one baby in her tummy and not two. The contraction was strong and consistent, while the dilation test indicated a 5cm opening. Seemed like Raina had decided that she wanted to come out and see the world already. The same Raina at 3 years old, who still doesn’t have any patience but is always persistent in her decisions.

An emergency caesarean was arranged immediately that afternoon. Due to its ‘emergency’ nature, the Abah wasn’t allowed in the operation room eventhough I was already garbed in the green surgical robe. Thanks to Dr.Zarin the paediatrician (also an Old Boy) who opened the door wide enough for me to slip in, the Abah was able to hold Supermama’s freezing hand and watched his two little angels being taken out from the womb one at a time. Raina was first to come out at 2.28pm, and then Raisa safely delivered 2 minutes later. Identical in all aspects yet different in their own ways.

To the birthday girls, remember who you are and where you come from. Always put Allah in your hearts. Remember that you are strong and you can accomplish anything no matter how long the roads to your goals look, InsyaAllah. Always have faith and stay true to yourself. Be kind and compassionate not only to everything around you but also to yourself. 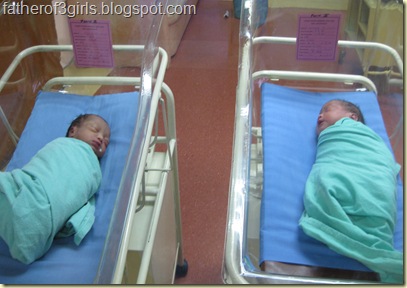 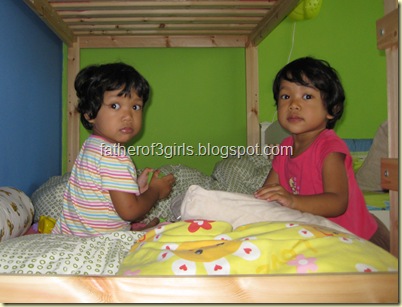 Posted by zombiedaddy at 4:16 PM 2 comments:

Ice cream has potent magical effects within the Zombiedaddy household. The twins may be at war with one another.. screaming, crying, trying to pull each other’s hair out, total chaos. The moment you mention ice cream, peace suddenly reigns. They’re best buddies again. Sitting on their little chairs. Wearing their little bibs. Raina is kissing Raisa on the cheek. Raisa is hugging Raina warmly. No screaming, no yelling. Only rainbows and butterflies and chocolate made in heaven. Wish I could give them ice cream all day everyday, but Supermama probably wouldn’t be too happy about it.

People say a picture paints a thousand words but the photo below only has five words in it.. “Ice cream makes me happy”. 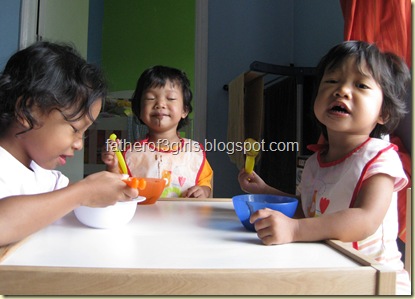 Posted by zombiedaddy at 5:46 PM 5 comments:

They are out from the room now. Ambling towards where I’m sitting. They are both holding something in their hands. Something that looks like some alien guns made from the colourful blocks.

Raina & Raisa : peng! peng! <screaming at the top of their lungs>

Monster : waaarrghhhh!! <monster appears to be immune from the shooting this time around>

Raina : Haii Yarrrkkk! Whackk! <gun now turns into something else and used quite effectively to whack the monster’s left ear>

Monster : adoii laa! <while letting go Raina’s leg and checking the block marks on his ear>

Monster : Takmo la. Go do it to Mama. 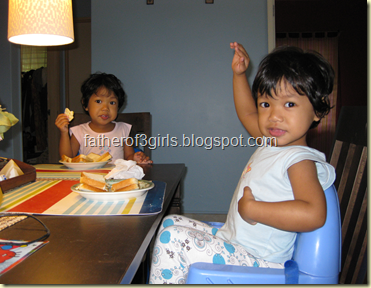 All monsters can relax now. The superheroes are taking their sandwich break.

Posted by zombiedaddy at 6:01 PM 4 comments:

Prayer For A Little Fighter

As a parent, nothing concerns me more than the health of my children. I pray to God everyday for them to be healthy. And when they are not, when they are down with fever, when I have to take them see the pediatrician, I get scared.

Today I heard that a friend’s child’s illness is confirmed to be leukemia, and he will have to undergo chemotherapy. He’s not even two years old yet. The news just rocked me to my core. This child arises each day facing a mountain of challenges I have heretofore been unable or unwilling to comprehend. Every day is grueling. For his parents, too. Not hopeless, not devoid of joy or happiness, but excruciating.

When our Nuha was admitted to the hospital for pneumonia when she was 2, it occurred to me that there can be no greater pain than the diagnosis that your child is unwell. I have never known fear like I did at that moment. I have never been so close to the idea that perfection is so fragile, that my love, no matter how fierce, isn’t enough to protect her entirely. Every time she coughed, every time she had difficulty breathing, I was wrecked. My love for my daughter defies definition. And during those moments, that love heaved and strained as if it were reaching out of my chest all the way past the doctor, the nurses, the nebulizer machine, to hug and heal her tiny lungs.

But what I went through is nothing compared to what the parents of this little boy are going through right this very moment.

My mind and heart are with Ali and his parents today.

Ya Allah, Give this little boy strength. Remove from him that which troubles him, And cure him of his illness. There is no power, nor strength save Allah, the highest, the great.

Posted by zombiedaddy at 3:22 PM 2 comments:

I was told during the briefing for all parents of standard one kids at Nuha's new school about a month ago, that our caring, loving but fickle government has again changed the school syllabus to a new one. They called it KSSR to replace the KBSR system. They said it's more inclusive and they coined new words like linus and others like it to emphasis the good things that our kids would be exposed to in schools. All these came to mind the other night when Nuha asked me a question while doing her homework.

I thought she was doing english or bahasa melayu, but this sounded more like zoology or maybe farming.

How the hoot am I suppose to know what time do goats go to bed or whatever it is they sleep on. They didnt teach me this kind of things when I was in school last time. Where's Supermama when you need her! Bring me the encyclopedia.

Abah: How many answers can you choose from?

Abah: what are the answers?

Nuha: it's goat or bad. You choose one.

Something I learned tonight.. Our education system is not as bad as my hearing apparently. 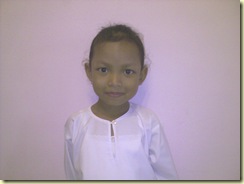 Nuha in her perfect white uniform (for now) 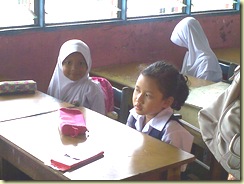 In the same class with her cousin Tij.. boleh ke belajar ni?

Posted by zombiedaddy at 5:58 PM 3 comments:

Father of Two Girls and a Pet Tiger

As of last night, I was officially the proud father of 2 girls and a pet tiger. This new status was imposed on me by the pet tiger herself as we were watching Dibo the Gift Dragon on TV with my other two real daughters.

It caught me by surprise. I was looking after Raina & Raisa who were at that time glued to Dibo when suddenly there was a growl coming from very close to my right ear. The growl got louder almost turning into a roar. I turned, and there it was the mightiest tiger in the whole world, squatting next to me.

And then, the mighty tiger spoke:

Tiger: Abah, you only have two daughters now

Abah: Eh, what happened to my other daughter?

Tiger: I'm not just a girl anymore, I'm a tiger. You have two daughters and a pet tiger.

Abah: Are you going to eat me and mama and adik?

Tiger: No! I’m only going to bite other people.

Abah: Ok then, you can be a tiger. But you still have to brush your teeth and kemas all your toys. 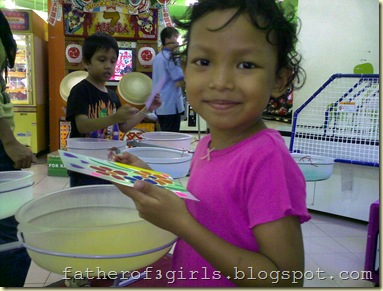 Posted by zombiedaddy at 4:14 PM 4 comments: 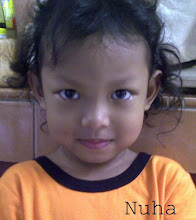 They're Linking To Us